A passion for beekeeping 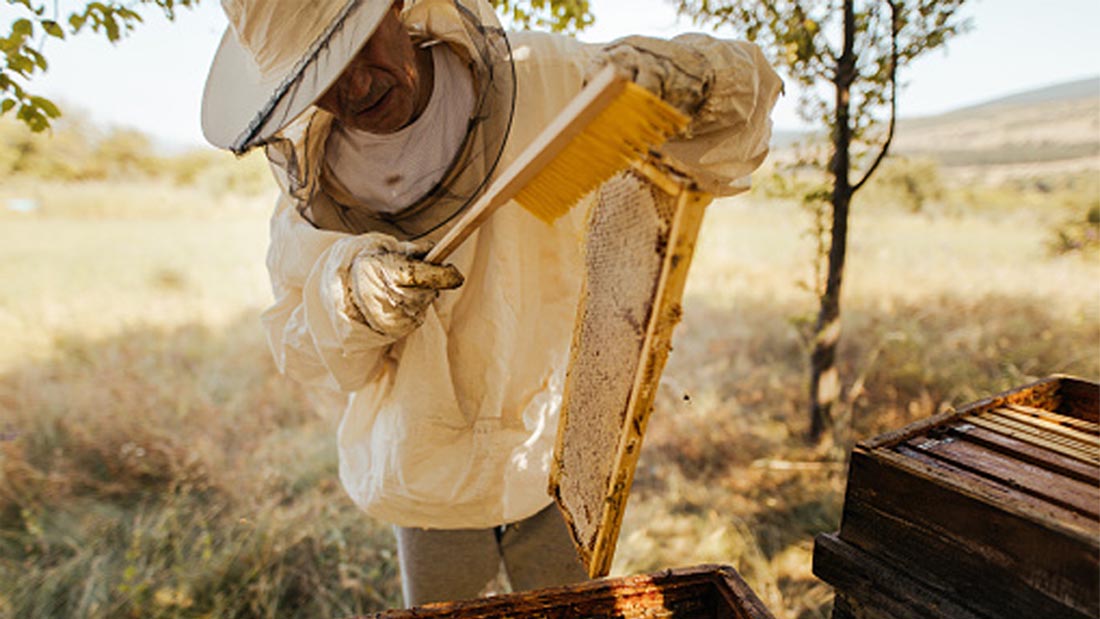 A passion for beekeeping

Marc Renou and Romuald Perez are business managers in Vallauris, respectively at ELSYS Design and AViSTO. They share a common passion for beekeeping, which goes beyond just collecting honey. Being an amateur beekeeper is also a way of protecting biodiversity. Let’s listen to their friendly and complicit exchange.

Question: You’re an amateur beekeeper, what does that entail?

Romuald: It consists of raising and taking care of bee colonies. However, there are as many apicultures than beekeepers, each has their own objectives and ways, quite like cooking.

Marc: With this activity, we would also like to participate towards the protection of the biodiversity because bees and pollinators in general are endangered species.

Marc: Bees have existed for a hundred thousand years, so they know how to take care of themselves. Unfortunately, for the last fifty years, we spray them with pesticides and chemicals, we install them in apiaries used for industrial production, they are attacked by Asian hornets and varroa which is a mite causing a lot of trouble for beekeepers. All of this led them to becoming fragile. In the past a hive could produce forty kilograms of honey every year, nowadays it has become much harder to obtain such results.

Romuald: Producing honey has become much more technical lately, it’s not “plug and play” anymore like it used to be in the past.

Q: Precisely, what should be done to produce honey?

Marc: Firstly, prepare the hives. We usually use three types of hives: horizontal, biodiverse and traditional.

The traditional ones are the cubic ones everybody knows. They allow easy extraction of the honey and visits to control the health of their inhabitants. Then, the horizontal hives inspired by the ones found in Africa, also called trunk hives; their use goes back hundreds of years. Finally, the biodiverse hives, which require no human interventions once the swarm is settled; it can consist of trunk hives positioned horizontally or vertically, wicker hives…

Personally, I built my horizontal and biodiverse hives myself, whilst Romuald uses traditional hives. 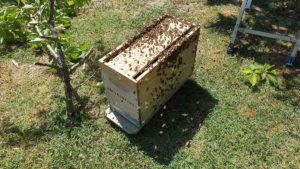 Q: How to populate hives?

Romuald: The simplest way is to purchase swarms from the internet. Other more interesting ways exist too like retrieving them from nature or generally where there are any.

Romuald: Bees live in colonies. When the colony is big enough or decides it’s time to part ways, the queen leaves her original hive with a group of bees to create a new colony (this is a similar process to the cell division, but on a colony level). The first colony, orphan, will raise a new queen; the worker bees will feed certain larvaes with royal jelly.

The new swarm will settle elsewhere, in places where bees are not always welcome (public spaces, chimneys…) We have given our contact details to specialized websites which catalogs beekeepers capable of collecting the swarms. Marc is also known by the local firemen.

Marc: No, because we refuse dangerous interventions on roofs for example. However, it’s an exhausting adventure each time. There is the stress in itself of wanting to collect the swarm without mishandling the bees but also the heat of the suit because these extractions also happen around the end of spring or during summer. For example, on the picture, the swarm was in the airduct of a ten meters high house. From the window with a bee vacuum (with an intermediate chest to collect them) we had to take turns to succeed the task. 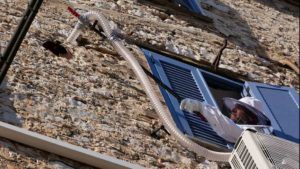 Q: What are your motivations?

Romuald: Curiosity, wanting to learn and I find bees likeable! I wish to produce honey, not in an industrial capacity but enough to have fun. At the moment I have one active hive, I would like to have 10 by the end of the year.

Marc: Personally, I own 8 of them, six are active and it took me three years to get to this point. The first year, the swarm didn’t stay in the hive, so I was a beekeeper for only three days! The second year, the queen bee died at the end of the summer and so this season was also lost. It’s only been since the third season that my swarm lives. This passion comes from a personal will to protect nature, but I also enjoy taking care of my apiaries which I built myself; for a long time prior I wanted to work with wood, beekeeping has given me that opportunity. Finally, observing the bees coming and going out of the hive has a pleasant hypnotic effect.

Q: Where are your apiaries located?

Romuald: In my garden at the moment but if I want my ten hives, I’m going to have to find a field to accommodate them.

Marc: I live in a flat, but I’m lucky to live opposite a farmer with whom I have an arrangement: he hosts my hives and I have to give him a portion of my production.

Q: Is it significant?

Marc: Last year, two kilos, which isn’t much. I hope to increase to around 10 kilos this year. 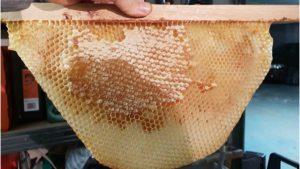 Romuald: I’ve only started last year so I’m hoping to harvest for the first time this spring.

Q: An anecdote to conclude?

Marc: During lockdown, beekeepers were allowed to go out to take care of their apiaries, so we were able to spend quite some time outdoors.